When I first thought about hiring a publicity firm to handle the marketing of Unrelenting Nightmare, I figured one person would be assigned to the task. I had little idea of how they would go about their job, other than getting the word out that Unrelenting Nightmare was a novel everyone should read and Stan Yocum was the author. I figured it would probably entail personal appearances, interviews, book signings, and maybe some newspaper/magazine articles about me. Well let me tell you, when I was first contacted I was shocked to find out that two people were assigned to handle my campaign. I immediately thought, why would it take two people? Well let me explain.

The first person was the traditional publicist. I had an idea of what that person would do, having dealt with them in the entertainment industry. In this case, however, my publicist would try to get my name and my book recognized in the literary field through interviews, possible guest appearances, articles about me, or whatever else was required so the public would learn about my book. But then I found out that I was also assigned a social media publicist. Social media publicist? What the heck is that? My traditional publicist was responsible for getting me noticed in newspapers and magazines. Side Note: Not knowing about a social media publicist was indicative of my lack of knowledge about social media in today’s world.

When I first talked to my social media publicist, she told me that I would have to update my website, my Facebook page, and also learn how to tweet and blog. I almost started to laugh. “I don’t know anything about tweeting,” I said. “It’s referred to as a tweet, not tweeting,” she politely informed me. “Yeah, whatever,” I replied. Then I asked, “So what’s a blog?”

Well you can see, she explained it to me and now I’m a blogging fool. Huh, I wonder if I’m correct in referring to myself as a “blogging” fool. Or would I be a “blogger” fool? Either way, I know my youngest daughter would agree that I’m certainly a fool!

My publicity campaign has been going on for three months now. It’s been a tremendous learning experience. And even though the social media aspect of publicity was what I resisted the most at first, I’ve found it to be the most interesting part of the campaign. And I now take great personal pride in knowing that I have finally entered the “new age” (at least for me), and find it amazing how easy it is to reach out and connect with people who have the same interests that I do, plus those who are looking for my book and want to know more about me other than being an author. 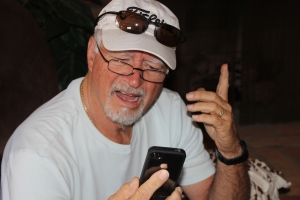 The last point I’d like to make is how well I’ve also adapted to using a smartphone, as indicated in the picture. I mean it looks just like the cell phone I use to have, which was used for nothing more than to make calls. And now … holy cow!