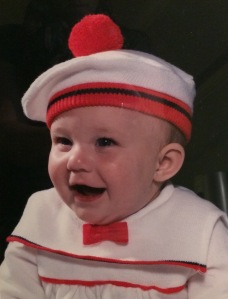 I remember saying that, or something close, to my wife, Melayne, when she told me she would be gone for the evening . Now the baby was my oldest daughter, Shannon, who was probably three months old at the time. I figured I’d take her for a walk around the local college, you know, to expose her to higher education and maybe get her competitive juices flowing. Then I’d take her out for dinner so people could see how cute she was and what a good father I was, able to handle a baby all by myself.

Now I should explain, this was the first time I’d ever been alone with a baby, not just my own baby, but any baby. Once again, I figured this would be a piece of cake. She’d probably sleep most of the time, so what could possibly go wrong? So I packed up the minivan. That’s right, a minivan, the consummate vehicle for a family that includes a baby and a dog. A few years prior, I lived alone, drove a Porsche and had a Harley Davidson motorcycle — and there was no dog. But gone where those days.

So, anyway, off I went, with a smile on my face and brimming with confidence. Well, that confidence lasted about four minutes. I suddenly became aware of a horrible stench coming from the backseat. I pulled over and checked it out, finding the problem came from my sweet little Shannon sitting in the car seat. And that’s when it hit me, and I mean hit me hard!

I believe I must explain. I grew up when fathers worked and mothers stayed home with the children. This particular occurrence happened in 1987, when this prevailing concept was still in practice. The key ingredient was that men didn’t change diapers. I never had or ever imagined doing so, knowing that Melayne would take care of that issue. “But guess what?” my mind said. “Melayne isn’t here. So have at it, big guy.”

I immediately returned home, grabbed the little stinker from the back seat and headed into the house. Now what we had done was convert a nice bar into a changing table, keeping in place the mirrors, shelves to hold bottles of booze, overhead cocktail glass racks, and a sink with running water. The only thing remaining to identify its previous life were wine glasses still hanging in the racks.

I laid Shannon down on the changing pad, not so sure of what I would uncover. I had an idea, but still proceeded cautiously. As it turned out, it wasn’t as bad as I’d expected. But then I recalled Melayne telling me about discarding the old diaper, using baby wipes and powder, how to put on a new diaper, etc. To tell the truth, I’d never really paid much attention, though. But there I was, trying to figure out which container held baby wipes, what did baby powder come in, and where in the heck did Melayne keep the new diapers?

Fortunately, I conquered all challenges, although it took me more than ten minutes to complete the task. However, no sooner had I picked Shannon up than another whiff announced … round two! To indicate how quickly I learn, though, round two only took a couple of minutes.

Considering that changing a diaper was once so foreign to me, I can now proudly say that everything involved in being a parent is … the greatest gift of all!