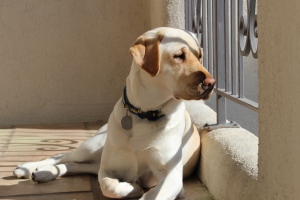 When I received my jury duty request this year I had a slight problem. My wife was out of town and there was no one other than me to take care of Tawny. When you raise and train a service dog, one of the governing rules is you never leave them alone at home for more than a couple of hours at a time.

So off I went to City Hall with Tawny in tow. I was part of the first panel of thirty-five jurors selected in the jury room to go to an assigned courtroom where we all sat and listened to the specifics of the case. And then the first twelve potential jurors were selected, and guess what, I was one of them. So up I went with Tawny close at my side, half expecting the judge to ask why I had a dog with me, which I would explain, figuring that she would then reluctantly release me. What she asked, however, was, “Would you like to sit at the end of the last row so your dog will be more comfortable? And by the way, what is your dog’s name?” I knew right then that having Tawny with me wasn’t going to get me released from jury duty.

As things turned out, I was asked all sorts of questions by the judge and the two counsels as a means of determining if I would be a qualified juror. Having Tawny at my side never, and I mean never, came up as an issue. Juror after juror was released for all sorts of reasons, but having a companion dog didn’t seem to be an issue at all. At the end of the day, all thirty-five jurors in the panel had been interviewed with twelve being selected, and I was juror number twelve. There was one problem, though. There was no alternate juror.

The judge decided to allow the jury to stand as is, without an alternate, saying, “I don’t want to take the time to pull a second panel tomorrow to find one alternate. So none of you had better get sick and not show up at court. It won’t be a long trail, so hang in there with me so we can all get through this.”

A fellow juror raised her hand and the judge acknowledged her. The juror stood and then announced, “Tawny could be our alternate.”

There was general laughter with an overall acceptance that Tawny would be designated as the alternate juror, and, I might add, did a wonderful job. Although, if we’d been required to call on her as an alternate, I doubt if she would have been able to contribute much in deliberation, since she paid little if any attention during the trial because she slept most of the time. But everyone enjoyed having her there, especially the judge and two counsels, who personally came up to me after the trail and said how much they enjoyed having her in court.