I’m heading to the Galapagos Islands at the end of this week, to see if Charles Darwin knew what he was talking about. If I don’t have a follow-up posting outlining any contradictions, then assume everything Charles said is true.

Now, of course, I’m joking. My scientific achievements and qualifications pale in comparison to Darwin’s, since I have absolutely none at all!

The remarkable thing about the Galapagos Island, and what Darwin was to discover, were certain species are endemic to the islands. The concept of Darwin’s Theory of Evolution is partly based on his findings during his five-year trip aboard the HMS Beagle from 1831 to 1836, which included a stop at the Galapagos. 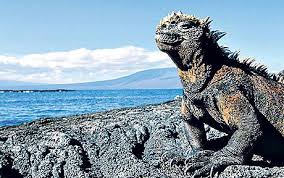 Everyone I’ve ever talked to who has visited the Galapagos has enjoyed the trip. I’m certainly looking forward to the adventure.

I will also be visiting Machu Picchu — Land of the Incas. My concern, though, are the thousands of stone steps that need to be climbed in order to get picturesque views of the ruins.

So off I go, and I sure hope Darwin was right so I don’t have to refute his theory.